After the death of Aaron at mount Hor, the children of Israel started on their journey around the land of Edom. V.4 explains that the people were discouraged over taking the long way around Edom. Once again, the people were complaining about Moses’ leadership and the lack of food and water in the wilderness. Ultimately though, the people were complaining against God and His provision and protection. They were upset with Moses for taking them out of Egypt to die in the wilderness. They quickly forgot about God’s miraculous protection. They also despised God’s provision of manna by calling it “worthless” or “miserable” bread (v.5).

Complaining against God was a very serious matter that resulted in God sending poisonous serpents as a judgment against the people (v.6). The serpents bit the people injecting them with lethal poison that killed many and caused discomfort to the rest. For the first time in the wilderness journey the people of Israel actually seemed to genuinely repent of their sin and called upon Moses to intercede for them by asking God to take away the serpents.

God answered Moses by commanding him to craft a bronze serpent to be fastened upon a pole. Anyone who was bitten by the serpents was to look upon the bronze serpent to live. In other words, if the people wanted to survive the snake bites, they had to look in faith to the bronze serpent trusting God to deliver them from the poison. It is interesting to note that God did not immediately take away the serpents even though he made provision for the people to survive the venom. The people had to suffer the consequences of their sin until God decided to take away the serpents. God forgives sin, but that does not mean that He will spare the consequences.

Israel’s deliverance was not through the bronze serpent, but through God’s provision and grace. The bronze serpent became God’s means of deliverance. For some of the people, the serpent would remind them of Satan’s deception in the Garden of Eden (Gen.3). Throughout all of time, snakes have never been in great favor with most of mankind. Ronald Allen notes that the Lord transformed a detestable image of death into a source of life and deliverance. The people were forced to look upon the very thing that represented what was killing them and by an act of faith had to trust in God who controlled life and death.

In John 3 we find the account of Jesus sharing with Nicodemus his need for salvation. In v.14 Jesus references the Numbers account of the bronze serpent. Jesus explains that the “Son of man” must be “lifted up” just as Moses lifted up the bronze serpent in the wilderness for the people to survive the snake bites. What does Jesus mean by this? In order to provide salvation for mankind, Jesus had to be “lifted up” and die on a cross for the sins of mankind. 2 Corinthians 5:21 explains that Jesus became sin for man and paid the penalty for the sins of the one who will believe and accept God’s free salvation. Just like in the Numbers passage, the “curse” became the basis for deliverance.

Based upon the analogy in Numbers 21, Jesus was telling Nicodemus in John 3:14 that he, along with all of mankind, had to look in faith to Jesus to receive spiritual life just as the Israelites had to look upon the bronze serpent for physical life. There was nothing Nicodemus or any man could do to earn his own salvation. Salvation can only come through the Lord Jesus Christ. Physical deliverance in the Numbers passage and the offered salvation in the John 3 passage both were provisions made by God out of His abundant grace. (Romans 10:13) For whosoever shall call upon the name of the Lord shall be saved.
Posted by Pastor Kauffman at 7:25 PM 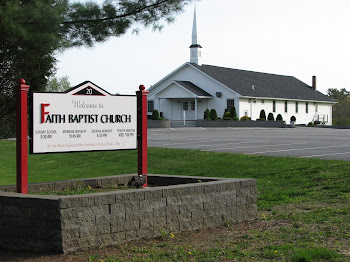